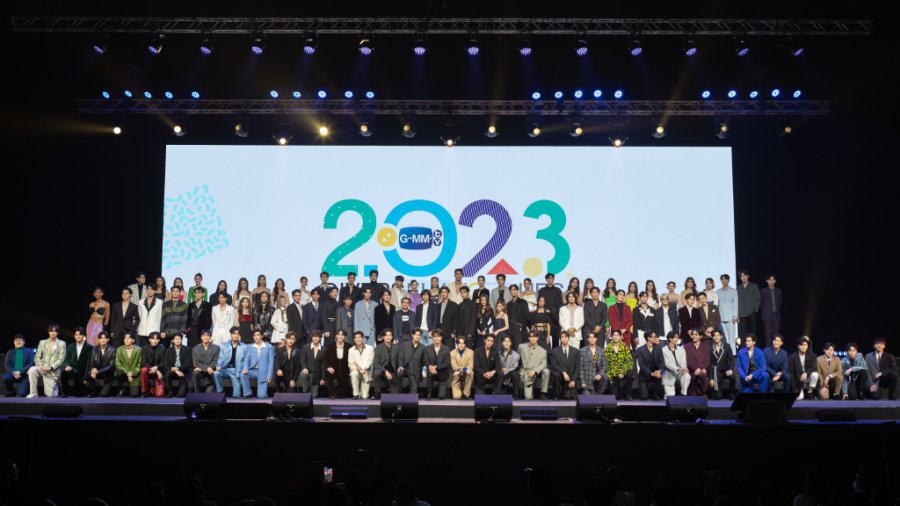 Thai entertainment production company GMMTV held their “GMMTV 2023 | DIVERSELY YOURS,” event on November 22, 2022, to announce their line-up of upcoming projects slated for release in 2023. A replay of the event can be found on GMMTV’s YouTube channel here (basic English subtitles are provided, though a little delayed). Below is a quick summary of the series that were announced.

There were 31 projects announced in the event, with 21 being new productions in 2023 and 10 from 2022 that were delayed due to the pandemic. Since there are so many projects, to make it easier for the readers who want to find a specific type of show without having to go through all of them below, we color-coded the shows as follows:

By the time this article is published, the dramas that are slated to air in the middle of December have probably started. Therefore, if you are currently watching (or have watched) these dramas below, let us know in the comments: are they worth a try by other readers?

Following the dramas slated for mid-December above, the closing night of the ending of 2022 has become darker with these three miniseries below, starting on December 28, 2022:

You probably heard about these upcoming dramas below, you watched their trailers, and you have waited for about a year since they were announced by GMMTV at their previous event promoting 2022 dramas. They couldn’t make it this year, but definitely they will next year!

Now, this is where the real excitement begins: 21 new projects from GMMTV: 1 TV show (just started), and the upcoming 19 dramas and 1 movie!

By clicking the screenshots below each drama (and one movie) you are forwarded to their respective official trailers on GMMTV’s YouTube account. The trailers are also available on their respective MDL pages. Watch them and share your thoughts in the comment section!

Having been newly introduced to the Thai entertainment industry in late 2022, it’s astounding to me how busy many of these young, impressive actors and actresses are – many are appearing in multiple series throughout 2023. I became a huge fan of FirstKhaotung after their run on The Eclipse, so I’m looking forward to seeing them flex their acting skills in Only Friends. But, I haven’t decided if I want to follow it as it airs, or wait to binge it.

Phew… so many upcoming shows… 19 trailers watched… where should I start? First of all, the list surprised me with GMMTV’s boldness to take on six remake projects of shows from all over the world. Let’s hope they make these adaptations the same quality as their respective versions, if not better, using the original sources. From the trailer, I think Cooking Crush will be the funniest BL romcom because of OffGun’s off-the-chart chemistry and the chef trio’s quirkiness. However, I made a prediction that Last Twilight may be the best 2023 BL from the plot, acting, chemistry, and cinematography seen. I was misty-eyed just by watching the trailer! Let’s see if my guess comes true by the end of the year ;D. As for straight romance, I will try all of Dew Jirawat’s upcoming dramas, despite disliking the original versions of the two remakes. Normally, I only become an actor’s fan after watching several of his/her shows, but having been glued to the screen every time Dew appeared during his debut in F4 Thailand: Boys Over Flowers, I wonder if this is what people called: falling in love at first sight scene???

Although I mostly watch romance dramas, after color-coding the shows, I realized that I’m more attracted to the purple ones, the non-romance dramas. From the upcoming Home School that I have waited for about a year, to the last non-romance drama trailer watched, I think I will be more in Dark Mode next year. I’m more excited about watching dramas with mystery/thriller/action/crime/horror genres that give me heart palpitation more than romantic dramas. After watching Enigma‘s trailer above, I asked myself: “how can danger be so seductive?”

Therefore, my fingers itched to make the GIF below, unplanned. Midnight Museum is gothic-like by looking at the poster. The mysterious plot gives me the Korean Hotel del Luna vibe. Overall characterization, costume, and cinematography are insanely creepy. But the unlikely collaboration of Tor Thanapob and Gun Atthaphan, two Thai actors with solid acting skills performing a variety of roles, is what I’m dying to watch for. Can I make another prediction: that Midnight Museum will become the best Thai drama in 2023? Time will tell…

Since GMMTV acknowledges and appreciates us, their international fans, by providing timely and proper subs in English and other languages on their official YouTube channel, therefore, we reciprocate by excitedly waiting (im)patiently for their upcoming shows next year.

Now, after gathering our thoughts upon watching all trailers above…

WHAT ARE YOUR THOUGHTS???